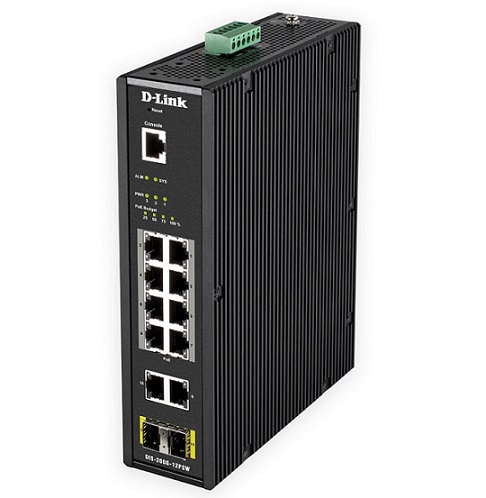 -Managed via web-based GUI or CLI through console port

Additionally, the DIS-200G-12PSW/U Series features 6 kV surge protection on all copper ports to help prevent damage to the switch and connected devices caused by sudden power surges and lightning strikes. The built-in surge protection of up to 6 kV can mitigate the damage to the switch from both indoor and outdoor devices and network connections by absorbing the excess energy while still letting through the amount of power required for the switch to operate normally. This helps to increase network reliability, reduces repair costs, and remove the need for replacement hardware in the event of an electrical surge or lightning strike.

The DIS-200G-12PSW/U Series supports ERPS quick failover recovery for ring topologies to ensure minimal downtime and avoid any loss of data in mission-critical deployment settings. Meanwhile, the dual power input allows for a redundant power supply to make sure the device continues to operate in the event of a primary power supply failure.

The DIS-200G-12PSW/U Series supports the Auto-Surveillance VLAN (ASV) feature. This automatically detects surveillance devices and puts them into a dedicated surveillance VLAN, segmenting this type of traffic from the rest of the network. This provides increased security of surveillance data, and gives the traffic a higher priority through the switch, minimizing the chances of video freezing or being delayed on live streams. A single switch can be used for both surveillance and data networks, removing the need for dedicated surveillance hardware while simultaneously reducing maintenance costs.

The DIS-200G-12PSW/U are PoE-ready switches with a total PoE budget of 240W, capable of supplying up to 30W of power per port to connected PoE-enabled devices. This effectively reduces deployment times, reduces cable clutter, and eliminates the need for dedicated power supplies to allow PoE-devices to be installed in remote locations.